Tomorrow’s factory in a cupboard

To run an industrial manufacturing workshop in a large cabinet containing connected machines powered by an elevator system: this is the challenge that HE-Arc Engineering has set itself. Autonomous[...] 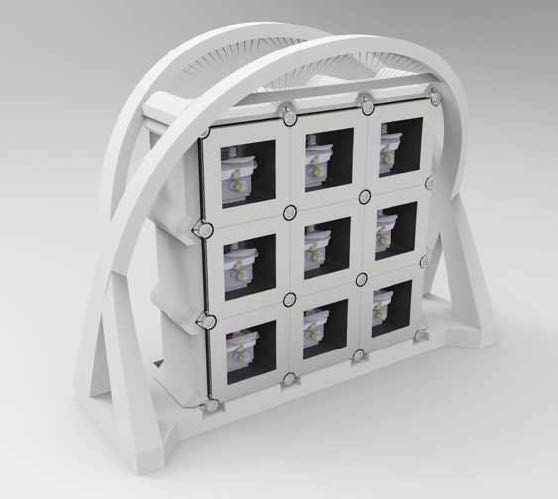 To run an industrial manufacturing workshop in a large cabinet containing connected machines powered by an elevator system: this is the challenge that HE-Arc Engineering has set itself. Autonomous and modular, the device could radically change the way small, complex and reliable components are manufactured. Some of the human work and the added value of industrial products would then move into the digital realm.
This micro-plant tailored to the data economy (often referred to as Industry 4.0) will be created through a partnership between HE-Arc Engineering and companies in the region, including Swatch Group and Richemont. Two other large watchmaking companies, whose names were not disclosed, as well as several SMEs, are taking part in the Microlean Lab (MiLL) project.

The origins of the Microlean Lab: the Micro5 machine tool. Developed at the HE-Arc in Saint-Imier, this five-axis milling machine, designed to machine microtechnical components, is presented for the first time to professionals in 2016. Its measurements are a sensation: five times smaller and much less greedy than its competitors, it is designed for small parts: watchmaking, medical, automotive, connectors, etc. Industrialized, i.e. transformed into a mass production product that can be marketed by companies in the region, the Micro5 will make its debut in watchmaking factories at the end of 2019.
In the meantime, HE-Arc has made progress in the design of a micro-plant: for the time being, it is presented as a standard infrastructure, a sort of large wooden cabinet with nine compartments, equipped with a robotic system for transporting parts and a numerical control unit.
Its compartments can accommodate, on request, the micromachines required for a given production. The choice is between turning, laser engraving, 3D printing or any other manufacturing, assembly and control technique for microtechnology parts.

One of the fathers of the Micro5, Professor Claude Jeannerat, head of the production means design group at HE-Arc engineering, is now in charge of the mechanical aspects of the project.
He sees the mini-plant as a sort of “smartphone of manufacturing”: interchangeable thanks to standardized dimensions, connections and operation, each micromachine is an “application”, installed according to the work to be carried out.
Professor Nabil Ouerhani, head of the Interaction Technologies Group at HE-Arc Engineering, coordinates the digital aspects of the MiLL. For him, it is a matter of using digital sensors to retrieve masses of data during the work of the machines: temperature, noise, and power consumption.

All the data, interpreted by algorithms, will allow the machine to perceive what it is doing, and to adapt its work in real time, in order to produce good parts the first time.

According to Nabil Ouerhani, making the machines autonomous would make it possible to save on adjustment and testing work, which today can represent between three weeks and three months of work for the most complex parts. This would open the door to industrial production of small series or even single parts.
However, this is a long-term vision of the evolution of the industry, which still requires long developments, the two engineers say in essence.
According to Max Monti, head of partnerships and development at HE-Arc Engineering, the project will cost around CHF 1 million per year over six years. Half of the costs will be covered by public funds, in particular from the federal innovation support structures. The remainder is committed by the partner companies.

The necessary cookies are absolutely essential to the proper functioning of the site. This category includes only cookies that guarantee the basic functionality and security features of the website. These cookies do not store any personal information.