If you walk through the streets of Chaux-de-Fonds, there is every chance you will encounter the name of Charles-Edouard Guillaume. It may mean nothing to you, yet in the 19th century this[...] 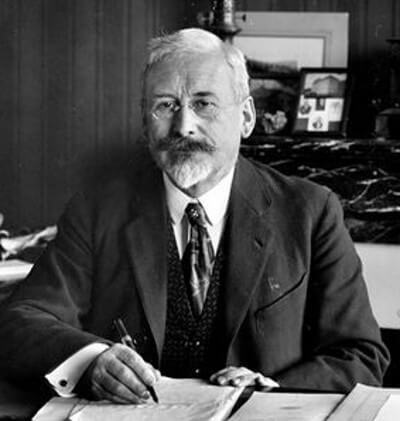 If you walk through the streets of Chaux-de-Fonds, there is every chance you will encounter the name of Charles-Edouard Guillaume. It may mean nothing to you, yet in the 19th century this lesser-known Neuchâtel researcher played a crucial role in the development of precision watchmaking. As the inventor of two families of alloy still used today, this Fleurier native received the ultimate recognition for all his discoveries in 1920, winning the famous Nobel Prize in Physics.

An unexpected but flawless career path

In the heart of the Neuchâtel valley region, Charles-Edouard Guillaume (CEG) spent his childhood in his watchmaker father’s workshop. Predestined for the family watchmaking business, the young man turned instead to physics upon leaving high school. After a doctorate at the Swiss Federal Institute of Technology in Zurich, he then developed a passion for metrology, the science of measurement.

Directly employed at the International Bureau of Weights and Measures in Sèvres, near Paris, it was his work on thermometry, how temperature is measured, and his attention to detail which would establish his reputation.

While, back then, units of time, sizes and temperatures varied from country to country or from region to region, CEG proposed simple comparators, available to everyone, such as water.

notes François Goetz, Professor at the HE-Arc School of Engineering in Neuchâtel

Faced with real shortcomings in the field of measurement units, Charles-Edouard Guillaume and the International Bureau of Weights and Measures provided solutions, including the introduction of master standards. This world-renowned organisation, where CEG worked for over fifty years, subsequently appointed him as its director from 1915 to 1936.

This desire to produce highly precise measurements led CEG to carry out the research on alloys which would make him famous,

Indeed, it was essentially to resolve problems of metrology that Charles-Edouard Guillaume would undertake his tireless quest for materials resistant to temperature change. Before his discoveries, if you took a metal bar in Switzerland, for example, and you observed that it measured one metre, the same object in Africa would expand due to the heat, changing its size.

In order to measure these units uniformly, CEG therefore tested more than 600 alloys and finally, in 1896, developed the Invar (short for invariable). An alloy of iron and nickel, this material was finally able to resist any expansion, or at least proved to be ten times less expandable than the metals of the era. Obsessed by perfect measurement, CEG then created a second nickel-chrome alloy endowed with invariable elasticity, known as Elinvar (short for elastically invariable).

These findings ultimately brought him closer to the world of horology. The rhythm of pendulum clocks, which depends on the length of the pendulum, notably benefited from these advances. Since these metal rods were sensitive to heat, they would become longer on very hot days and therefore run more slowly than usual. The advent of Invar was a revolution for the clockmaking sector, which could now offer rods no longer requiring frequent adjustment.

And wristwatches were also able to benefit from Elinvar. Since the rhythm of these timepieces was provided by a coil balance (a sort of wheel connected to the dial by a steel coil moving back and forth), when variations in temperature occurred, the coil would weaken. Thanks to the use of Elinvar, the elasticity of the coil no longer changed and the watch’s time-keeping mechanism could retain its constant rhythm. The invention of Elinvar thus enabled timepieces to become 10 to 50 times more precise. Today, most mechanical watches are still equipped with alloy coils similar to those used by CEG.

In addition to watches, Charles-Edouard Guillaume’s work can be found in a wide range of applications. Formerly useful for lighting, non-expanding metal found its function in incandescent lamps, counteracting temperature rises caused by the electric current, as well as in cathode-ray tubes inside old-generation television sets.

Invar was also notably used to resolve an engineering problem in the Eiffel Tower, wire was suspended from the ground to the second floor of the monument to analyse its deformation due to temperature and see how it behaved in the wind.

explains François Goetz. In the field of geodesy, Invar in turn proved invaluable for determining the shape of the Earth with even greater precision.

Today, one of the major applications of CEG’s research, apart from mechanical watches, is in methane tankers. These ships carry liquid methane at minus 162 degrees, a bit like a giant thermos flask, and must therefore resist any form of expansion. Ultimately, all these concrete examples reflect the genius shown by the unassuming scientist known as Charles-Edouard Guillaume.

His work achieved a level of perfection almost unrivalled today,

observes François Goetz. Despite his anonymity, CEG’s work continues to be honoured by the Foundation of the same name, a name you may encounter along the narrow streets of Chaux-de-Fonds.

1878 : Enters the Swiss Federal Institute of Technology in Zurich

1883 : Joins the International Bureau of Weights and Measures