Daniel Kaufmann grew up in Solothurn and studied in Bern. He worked at the Swiss National Bank (SNB) in a macroeconomic forecasting group. He then joined the Center for Economic Research (KOF), where[...] 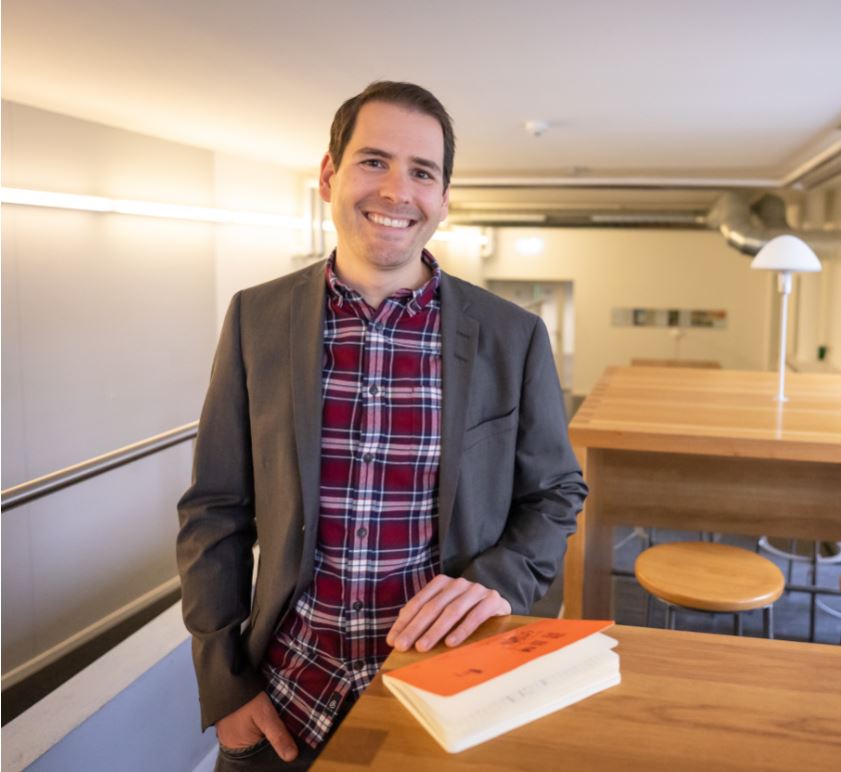 Daniel Kaufmann grew up in Solothurn and studied in Bern. He worked at the Swiss National Bank (SNB) in a macroeconomic forecasting group. He then joined the Center for Economic Research (KOF), where he researches price and wage fluctuations for the Swiss economy.
Currently assistant professor at the University of Neuchâtel, he mainly focuses his research on monetary policy. He has recently published articles on economic history, in particular on the relationship between deflation and economic activity.
He also develops prospective indicators such as the fever curve for the Swiss economy.

The fever curve in brief

Because macroeconomic data are published with considerable delay, it has been difficult to assess the health of the economy since the beginning of the rapidly evolving Covid-19 crisis. The fever curve for the Swiss economy was developed using daily financial market data and publicly available news. The indicator can only be calculated one day late. Furthermore, it is highly correlated with macroeconomic data and survey indicators of Swiss economic activity. It therefore provides reliable and timely warning signals if the health of the economy deteriorates.

Unemployment and GDP forecast figures for 2020-2021 are constantly changing. How do you explain this change?

For the fever curve, how did you come up with the idea of using daily data rather than quarterly data, for example?

The COVID19 crisis was a trigger. Indeed, the Federal Council had to take weekly decisions for the management of the health crisis, whereas they are usually taken on a quarterly basis at least. So the FOPH also published daily statistics.
In macroeconomics, it is still rare to use high-frequency series. However, large quantities of data are available on a daily basis, such as credit card transactions for all Swiss households. It is important to point out that high-frequency data have the disadvantage of expressing false signals, temporary fluctuations that often have to be ignored. In general, we observe them over several weeks to ensure that real information is emerging. On the other hand, our indicator combines several sub-indicators from different databases to reduce the probability of a false signal.

With the speed at which information is disseminated, do you think that this frequency of decision making is increasing?

It is indeed possible. For example, the SNB announced the introduction of the floor rate outside of the institution’s official quarterly reporting dates, which came as a surprise. In the case of the COVID19 , the government had to adapt very quickly. And in this context, indicators such as the fever curve are becoming very appropriate.

For the moment, the data and codes are available in open source on github, a development platform. The aim of this project is to use only freely available data. Thus, everyone could improve them or use part of these data by combining them with others. It is possible to go to github, download the indicator and use it in a forecasting model or simply look at the link between GDP growth or unemployment rate. The advantage of this indicator is that it can be calculated on a daily basis, which is quite rare in the world of economic forecasting.
We have received many comments from our users. The indicator has been mentioned in various reports such as the one from Credit Suisse or SwissLife. 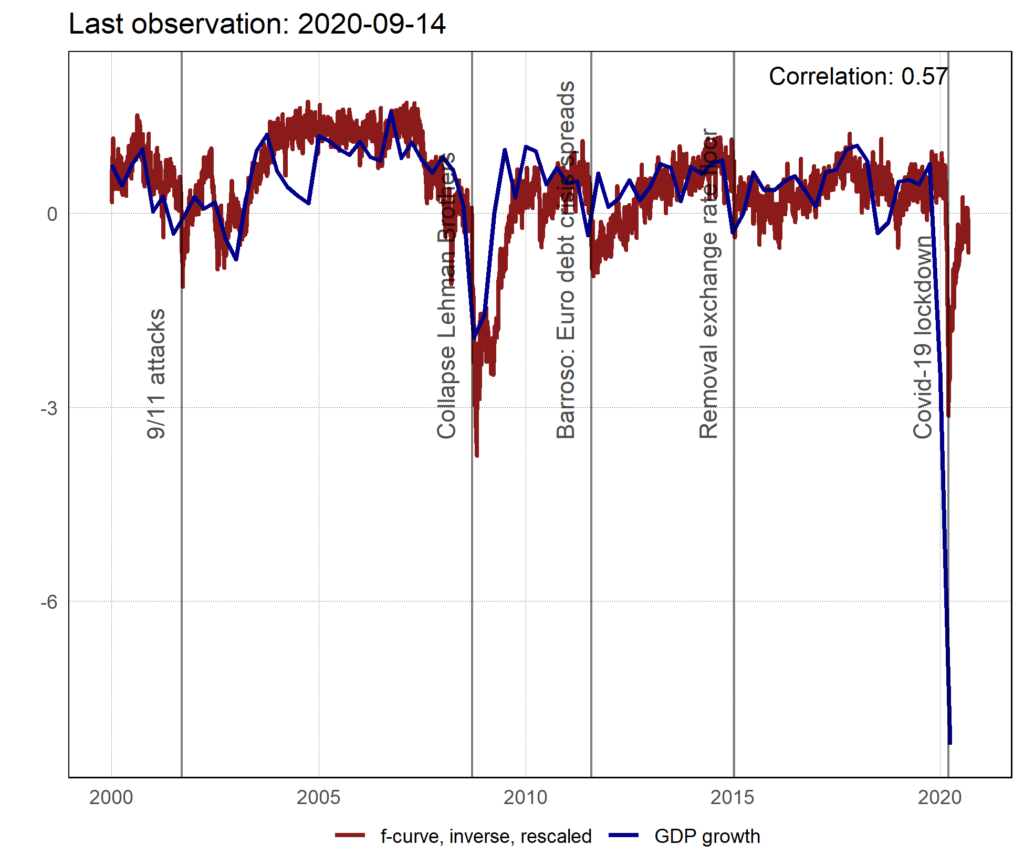 When the curves are above zero, GDP increases, below it decreases (note that the fever curve is reversed to facilitate comparison with GDP). During the Leman Brother crisis in 2018, there is a sharp fall in GDP, i.e. a recession, and the fever curve index follows this trend, although the correlation is not perfect (0.57). The purpose of the fever curve is not necessarily to relate it to a statistical concept but rather to announce cyclical trends based on higher frequency data. During the COVID crisis,19 the curve reported a sharp fall in GDP already in March, although the fall in GDP in the first quarter (published by SECO in June) was even more significant due to containment. Only about ten variables are used to calculate the fever curve, which also explains why it can sometimes express imprecise signals. In general, however, it can be said that the fever curve follows the same trends as the rise or fall in GDP growth.

How does the sentiment score, which is used to calculate the fever curve, work?

The sentiment score is based on Swiss newspaper articles, in German for the moment, but we are in the process of extending the selection to French articles. We take into account the lead text, because it is in this part that important information is often relayed. Moreover, it is often free of charge, which makes the fever curve accessible to everyone. We are currently analysing the relevance of taking into account more than just the hat.
Concretely, we are counting the number of words with positive and negative consonance (based on existing lexicons). Then we subtract the negative words from the positive words and divide it by the total number of words used.

This approach is used in marketing to evaluate a brand’s reputation. Is this new in economics?

In economics, this approach is also similar to economic surveys, for example the KOF, where companies are asked to judge their situation in a qualitative questionnaire. Professor David Ardia has worked on sentiment-based indicators, but rather for the United States. Other researchers have examined indicators based on recent research by search engine users. The disadvantage of the latter approach is that this information has only been available since 2006. In the case of our indicator, however, we needed to cross-check our variables against several recessions. Therefore, we have calculated the fever curve since 2000 and we are currently evaluating whether we can extend the indicator even further.
Currently, our sentiment score is still too volatile because it is based on a limited number of data, but we are working on extending it. That is why we are combining these sentiments with financial market data in the fever curve.

According to your model, is the Swiss economy affected by foreign or domestic factors?

In order to answer this question, we have categorised the articles according to their country of origin. Specifically, we looked for words like “Switzerland”, “Europe”, “Germany” in the articles before calculating sentiment.
Our indicator uses not only sentiment, but also financial market variables (e.g. risk premiums or stock price volatility). For financial market variables, we have variables on the Swiss franc interest rate on Swiss corporate bonds. In addition, we have researched the same variables abroad. With this categorisation, our statistical approach makes it possible to distribute the fluctuation of the indicator related to the foreign and domestic variables. 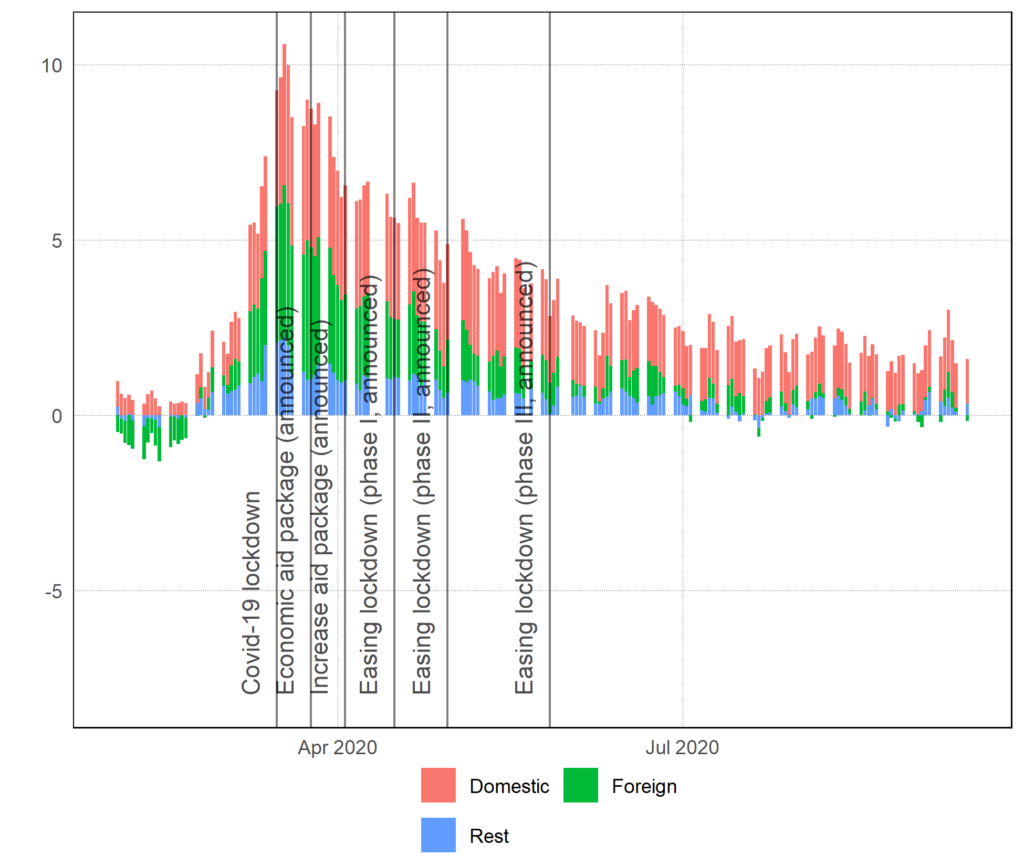 In the graph, it can be seen that the contribution of foreign and domestic variables was roughly equivalent to the peak of the crisis (note that the fever curve is not reversed; an increase means an increase in “fever”, i.e. a worsening of the economic situation). Recently, the domestic contribution has been greater. Indeed, the crisis has impacted both the demand for Swiss products and domestic demand, as the climate of insecurity (especially employment) has pushed Swiss people to save more.
The impact of total containment on economic growth is often questioned. Attempts have been made to combine pandemic and economic models. It has been shown that even without containment, the population would have protected itself by limiting social activities outside the home. At the very least, a national government directive has the merit of establishing a uniform protection policy, while reassuring people that they can count on a government capable of making decisions in an emergency.

As you continue to work on this model, do you have one or two points in particular that you would like to improve for future versions?

My doctoral student Marc Burri, who is co-author on this article, is working on improving the model for his doctoral thesis. We are gathering more data from more French-speaking newspapers and newspapers in Ticino to see if the information received is different.
In a second step, we would like to move away from the score feeling, which is a somewhat naive approach.With the use of the learning machine, we could envisage more segmented fever curves, by field of activity or by region for example, and no longer only on the Swiss economy as a whole.