According to the latest national accounts data published by the FSO (January 2021), Neuchâtel's economic growth, measured by its GDP, was +5.1% in 2018, the highest cantonal increase in the[...] 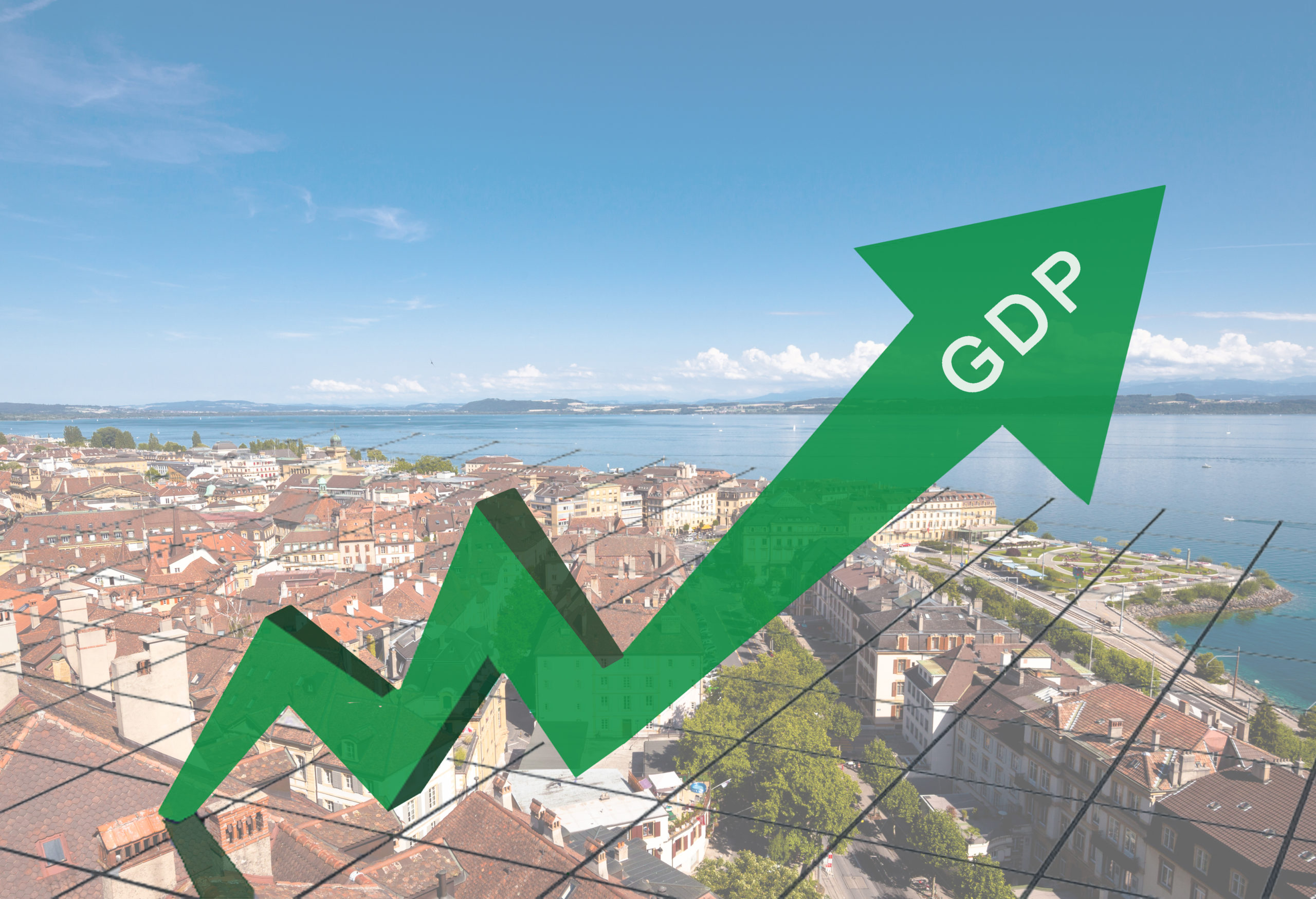 According to the latest national accounts data published by the FSO (January 2021), Neuchâtel’s economic growth, measured by its GDP, was +5.1% in 2018, the highest cantonal increase in the country.

Daniel Kaufmann, assistant professor at the University of Neuchâtel, comments on these results for the Service of the Economy.

What can be said about this growth of more than 5% compared to national and international growth?

These figures show that Switzerland is an open economy. The country earns about one out of every two francs by selling goods and services abroad. The canton of Neuchâtel is even more open than Switzerland. Its economy is highly dependent on the business cycle abroad. In 2018, GDP in the OECD economies grew by 2.3%, the Swiss economy by 3%. The canton of Neuchâtel therefore benefited even more from the good economic climate abroad with a growth rate of 5.1%. 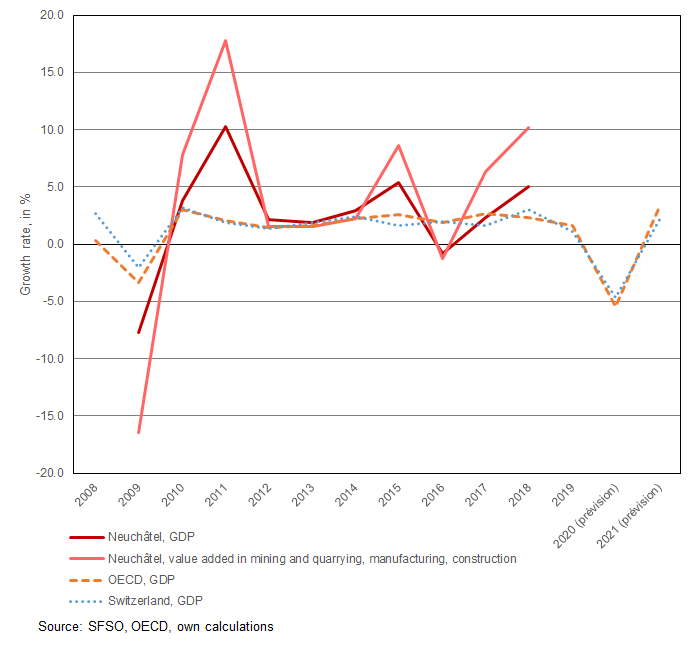 How do you explain such dynamism?

2018 was a good year for the global economy and foreign trade, and thus for the canton of Neuchâtel in particular. However, Neuchâtel’s GDP growth fluctuates strongly over time because the economy is so dependent on foreign trade. Thus it is quite possible that the Covid-19 crisis will severely hamper the canton’s growth for 2020. If we look back to the financial crisis the GDP of the world economy declined in a similar way as during the Covid-19 crisis. At the same time, Swiss GDP fell by -2.1%. But Neuchâtel’s GDP fell even by -7.7%. This shows that Neuchâtel’s economy is much more affected by foreign developments as Switzerland as a whole. Therefore, the figures for 2020 will likely show a strong decline in GDP for Neuchâtel.

Does the canton’s industrial character play a major role in this growth?

Manufacturing is the most important sector in the canton of Neuchâtel. Mining and quarrying, manufacturing and construction contribute almost 50% of Neuchâtel’s value added. In all other cantons, except Basel-Stadt and Jura, the contribution of these sectors is lower. Moreover, manufacturing, in particular, is highly dependent on the growth of the global economy. This is the main factor that explains why the Neuchâtel economy is strongly affected by fluctuations in foreign trade.

According to the statistical models, what economic recovery is expected in Switzerland and more specifically in Neuchâtel?

My forecasting model is based on the GDP figures for Switzerland (which are already available up to 2020) and the SECO Swiss GDP forecasts (for 2021 and 2022). With this model, we can forecast Neuchâtel’s GDP growth, as well as, growth in the mining and quarrying, manufacturing, and construction for the canton of Neuchâtel.
It takes the following form.

This model explains about 70% of the variation in growth in Neuchâtel. 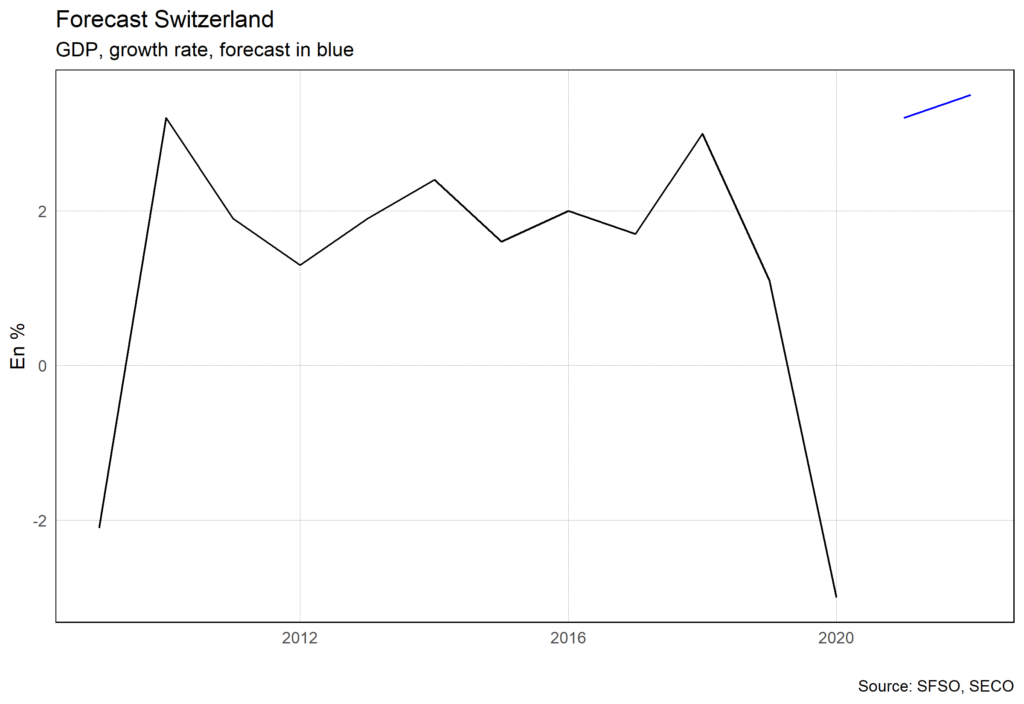 This first graph shows the official figures for Swiss GDP growth from the FSO with the SECO forecast. These figures are the basis for my Neuchâtel forecasts.

The two graphs below contain the forecasts for Neuchâtel. You can see that according to the model, GDP and value added have fallen sharply in 2020. In 2021, the model forecasts stagnation. Growth only becomes positive in 2022. 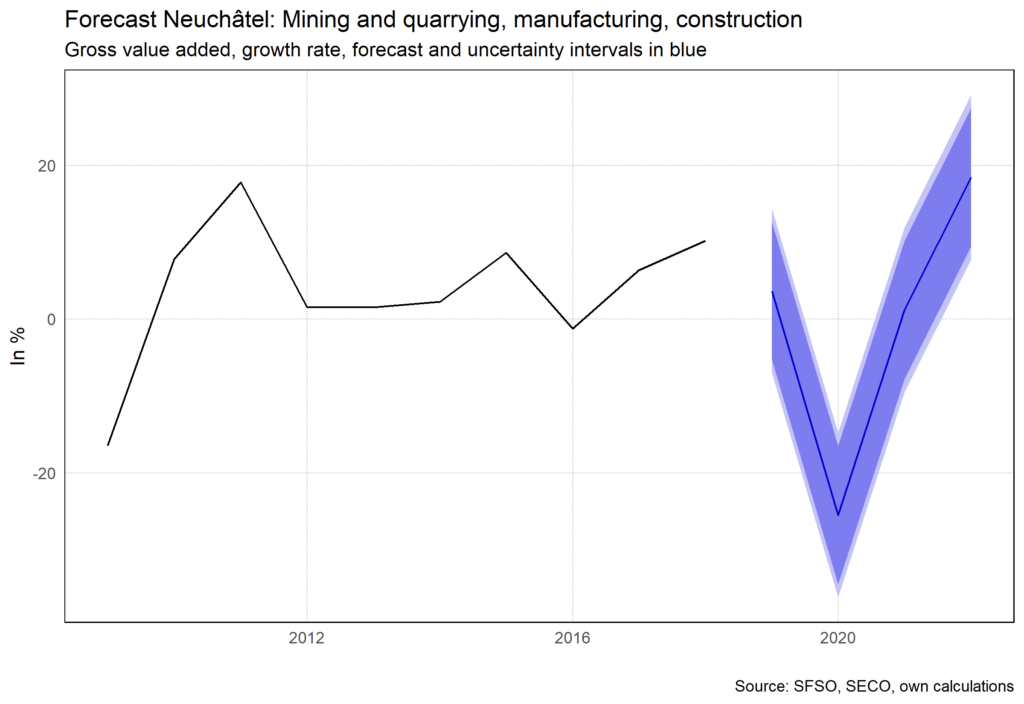 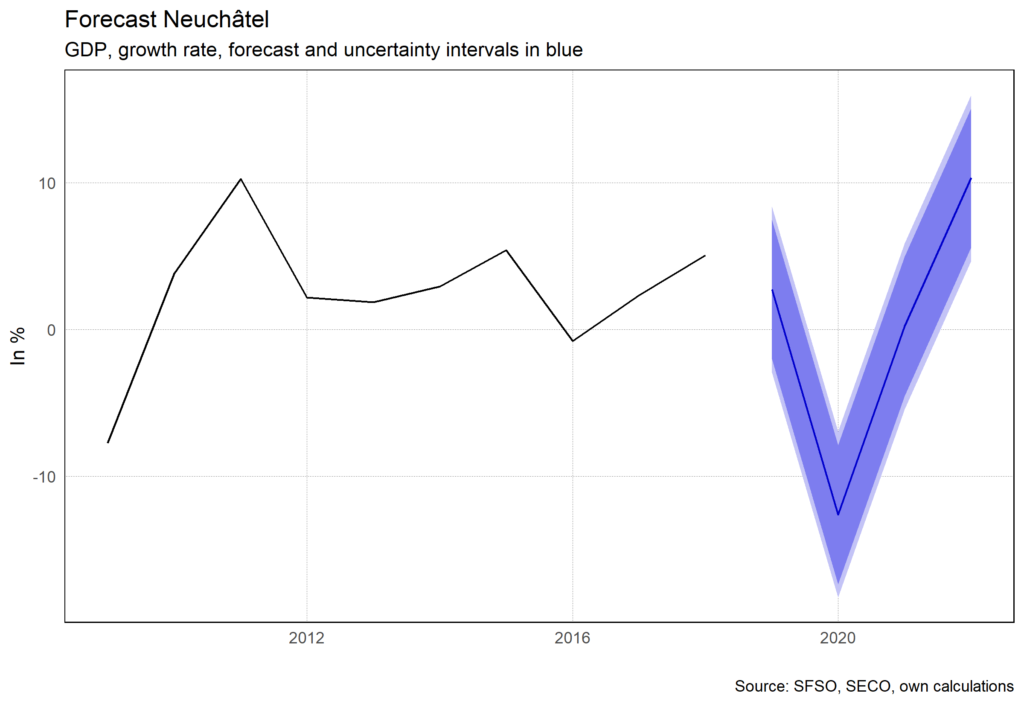 Of course, these forecasts face significant uncertainties as many factors are still unknown, and, the figures are based on uncertain predictions for Switzerland as a whole.

How do you see the post-Covid19 recovery?

Foreign trade was mainly affected in the first half of 2020. This means that growth in the canton of Neuchâtel will probably be strongly negative in 2020, although we will have to wait for official figures. But the world economy has also rebounded rapidly according to OECD figures. I can hardly imagine that foreign trade, except for a few sectors such as tourism, will be permanently affected by the Covid-19 crisis. Moreover, the economic stimulus packages, especially in the US and the EU, will support global growth. Finally, if the vaccines are rapidly distributed and also work with the new variants of the virus, the advanced economies will be able to quickly return to a relatively normal functioning economy (this will probably not be the case for developing economies). In the end, I think the crisis is not as bad as the gloomy economic scenarios published a year ago. But it is still too early to judge the medium-term impact. In particular, on the productivity of companies that have to adapt to a new world, where new pandemics are not excluded.